Lower Austria (German:  Niederösterreich) is a federal province of Austria that is situated in the north-eastern part of the country. Its area is 19,186 km² (1-st place). Lower Austria measures 170km from north to south and 180km from west to east.

It is also divided into four regions: Waldviertel, Mostviertel, Industrieviertel, and Weinviertel. It is connected with geographical division of the land from west to east by the Danube River: Waldviertel and Weinviertel are located to the north of the Danube; Mostviertel and Industrieviertel – to the south. These regions have different geographical structures. Whilst the Mostviertel is dominated by the foothills of the Limestone Alps, most of the Waldviertel is a granite plateau. 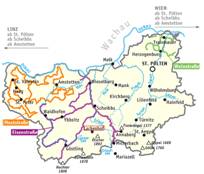 Mostviertel is considered to be one of the virgin areas of Europe. Mountain massif Otscher is not very high (1893m). Mountain resort Lackenhof and peaceful valley Ybbstal are located on the west. There is also joint area for skiing Lackenhof that includes such towns as Gaming and Langau. 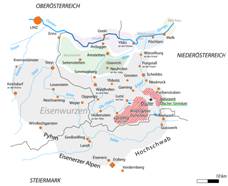 Otscher is the highest peak on the southwest of Mostviertel (1893 m). Mountain name is of Slavic origin and means “father mountain”. Natural park Otscher-Tormauer is located around the mountain. This park is the biggest reserve in Lower Austria and it occupies 170 sq m. There are many equipped tourist paths, caves and waterfalls in the park. Lackenhof am Otscher is the most famous ski resort there. 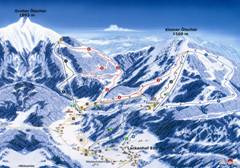 Lackenhof is located 140 km from Vienna. It is very comfortable village where you will want to return again. It is located 810 m above sea level at the western foot of the Otscher Mountain. The first chair-lift moving people to a height of 2.4 km began to function in 1963. Now more than half of hotels belong to foreign investors. Total length of pistes is 19 km, they have different level of difficulty (“easy” – 6 km (blue piste), “medium difficulty” – 9 km (red piste) and “difficult” – 4 km (black piste)) and are served by 9 lifts (3 chair-lifts and 5 surface lifts + 1 special lift for children – “Magic Carpet”).
Some pistes descend from Kleiner-Otscher (1560 m) and have northern exposition that’s why they have good snow cover (there are only 20 snow canons on the resort).  The second “branch” begins from the back spur of the Otscher Mountain near Otscherschutzhaus (1420 m) and has northwestern orientation, there is a lot of snow there but it is not preserved well.

There are also 17 km of flat pistes, fun parks with 1 half-pipe, 2 km long sledge track, 2 skating tracks and one curling rink, 17 km of footpaths, clubs of paragliding and ice climbing. In Lackenhof you also can find restaurant, disco, tennis courts, massage parlour, 2 ski schools and 2 snowboard schools, children’s park with separate lift and piste (it is the first one in Austria), sport equipment rental and sport shop.